A scenic hilly 200 that will give you plenty of excuses to get off your bike to take a photo or two. Dayboro and Mt Mee with a few dirt roads and 4500 of vertical gain. What else could you ask for? The only way is up! – That was in the brochure.
Roger Hawley, Cam Taylor and Paul Witzerman answered the call. For those that have not been following this ride, it used to be called the SM5000 until it was found out that there was only a mere 4500 m in the 200 km ride.

Jackson Rd is not one you will forget:

(Thanks to Cam Taylor for stolen pics)

This is the one day of the year when there are no “opening times” at checkpoints. There is only one closing time at the end and that is 24 hours. While most Audax rides are constrained to be “non-competitive”, “it’s not a race”, “personal challenge”, etc., the Flèche Opperman is the one Audax ride which is unashamedly in the spirit of Opperman: go as fast and as far as you can (as a team). Thanks to FNQ, Queensland had a great Oppy turn-out this year.

Anthony Richardson (captain), Nick Burnett, Nic Booth, Mark Riley, Rod Staines.
Ant was involved in a previous Qld Oppy record (“A Pair of Nicks with Two Dicks“) and he was keen to go again. He sent out the emails and everything fell into place. Simon Faber volunteered his services supporting the ride and immediately started sending out gourmet menus for the checkpoints. On the day I think he must have also organised the weather and had the roads swept.

It was almost too good to be true. Nic Booth had us ticking over at a frantic pace and time was banked. Of course, there are some photo oppytunities that you just have to stop for. 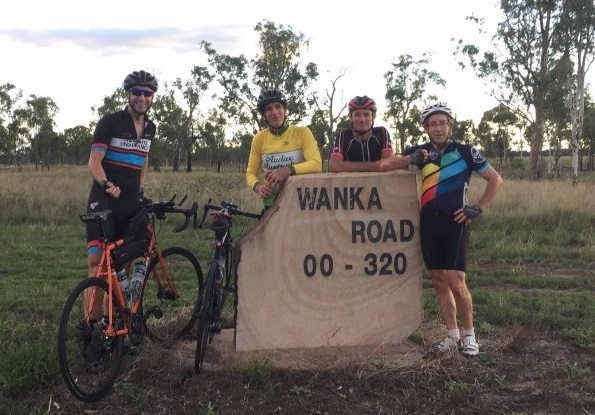 We were mindful of looking after ourselves, taking time-out for personal hygiene:

Towards the end of the day Ant started to “lose his food” and when even Simon’s gourmet egg & bacon rolls could not tempt him to eat, the sun was setting and his day was done.

There was only 1400 m climbing, and most of this was towards the end. At the 400 km point we had climbed less than 500 m. And yes, our thoughts turned to you Andrew Bragg: “<125m/100km" this is what ride numbers should look like. When we did have to do some climbing, I was finding my legs fragile. The ride to the top of the range took its toll: 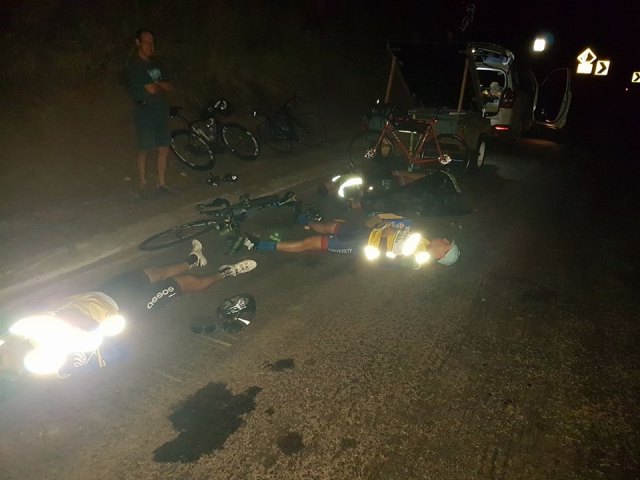 But that was a very comfortable patch of bitumen and it was all smiles at the end. 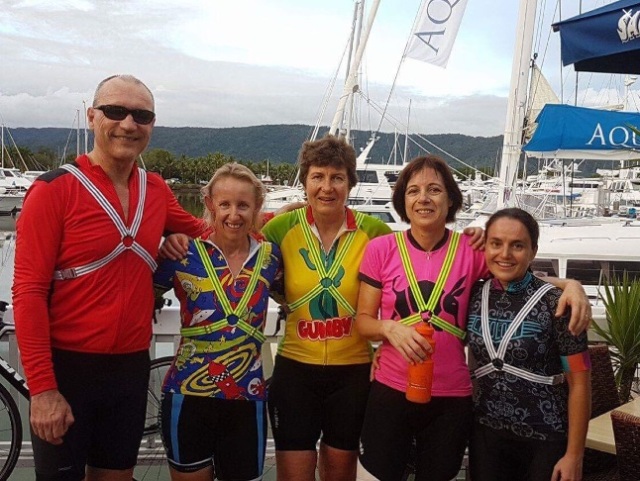 What an awesome ride! I remember my first Oppy had team members that were old hands and knew what to do from experience. Here is a team who were all doing their first Oppy, with a couple of riders doing their first 200k. Four females and a (token) male. They wisely started from the highest road in Queensland, but a descent cannot last 360 km. Read another great ride report from Gayle below.

The Extremes at the Finish:

When too much endurance cycling is barely enough, have a look at the IPWR.

Tracker here: indianpacificwheelrace.maprogress.com
This is a great race: you have to ride self-sufficently from Perth to Sydney. It started on the same day as the Oppy so there are still racing now. It has most of the world’s top bike-packing racers entered; but with lots of “normal” people also riding. I counted 13 Audax members among the total of 70 riders, and I expect the % Audax will be much higher in the numbers finishing.
The ride will continue over the next 2-3 weeks with the winner expected to complete within 8 days. Mike Hall and Kristof Allegaert are currently battling it out, but anything I say here will be out of date by the time you read it. Saturation media coverage if you go looking:
website: http://www.indianpacificwheelrace.com
facebook: http://www.facebook.com/IndianPacificWheelRace

Over the past couple of years several riders have been “racing” each other while on different continents in the Highest Annual Mileage Record (HAMR). Steve Abraham (Audax UK) started by challenging a 75 year old record of 75,065 miles (120,805 km) ridden in one year that was set by Tommy Godwin in 1939 – a record that was long thought to be unbreakable.
A traffic accident prevented Steve finishing his first attempt. However, it sparked a number of other attempts including one from Audax Victoria’s Miles Smith. Eventually American Kurt Searvogel exceeded Tommy’s record and set a new mark of 76,076 m (122,432 k). This record is now about to be broken by Amanda Coker who has essentially blown the field away. She has seemingly optimised everything possible and has been extremely consistent, banging out 380+k day after day like a metronome.

In fact she is getting faster and is already at a pace (400+k/day) that would break the world month record. She will make a month world record attempt concurrent with her yearly attempt starting on 25th March. Check out her Strava account here.

Barring any incident she is on target to break the current record by ~12,000 km. And I don’t think that record is going to be broken any time soon.

Sadly, less than a week ago Mitsuaki Inagaki was killed after two Audax riders were hit by a truck during the Tiwi 1200 in New Zealand.

There is a beautiful story about Micky here.

However I did not get any comments about the “100 miles in a 100 minutes cyclist”. According to my rough estimate this is 60 miles in 60 minutes, which is approximately 60 mph. Hyperbole from the poster?
Given that 60 mph is 96.6 kph and Sir Bwad’s hour record is only 54.5 km it would appear to be so. Or maybe not, when you consider what they used to get up to on the velodrome:

And that is a great set of handlebars.

Email answers to: audaxqld@gmail.com. The winner is drawn randomly “calculated” from all correct answers sent in before the next newsletter.

Scenic ride from Ferny Hills, through Caboolture, Kilcoy, Esk etc. around the mountains west of Brisbane back to Ferny Hills.

Reasonably flat course with distances of 100, 200, 300, 400 and 600 km. We start with part of the river loop, and then head west, taking in the Scenic Rim and the Brisbane & Lockyer Valleys. Please contact me if you need any sleeping arrangements.

A scenic ride around the mountains North West of Brisbane.

Ride from Atherton past canefields, coffee farms and cattle paddocks to the northern Tablelands areas of Dimbulah, Mareeba and Walkamin. Return via the tourist icons of Yungaburra, the Curtain Fig Tree, the Afghanistan Avenue of Honour and Lake Eacham.